Pursuant to Clause 8.1 of the Charter of JSC INK-Capital, the General Shareholders Meeting shall be held (in case the Meeting is held by joint presence) at the location of the Company – Irkutsk, Russia, but it can be held in other cities as well – Moscow or London. 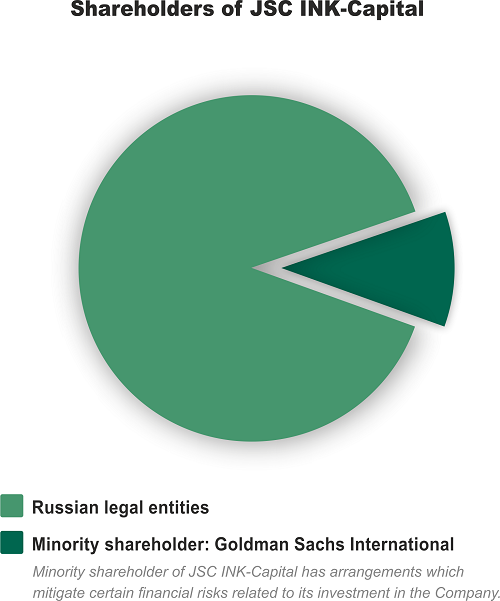 The Board of Directors of JSC INK-Capital provides the Company with strategic guidance, monitors the activity of the sole executive body, determines major principles and approaches to creating risk management and internal control system within the Company, and carries out other key functions, except for resolving the issues that fall within the competence of the General Shareholders Meeting.

Pursuant to the international Corporate Governance best practices JSC INK-Capital insures responsibility of all Board members and the General Director of JSC INK-Capital. Based on the results of the tender for such insurance JSC INK-Capital engaged Public Joint Stock Company "Ingosstrakh".

Mr. Buynov graduated from Leningrad Institute of Railway Engineers named after Obraztsov (now St. Petersburg State Transportation University) with a diploma in Engineering. He spent his early career as an engineer followed by the position of the deputy director and then the head of small business. Since 1993, Mr. Buynov has been running a business of his own. In 2000, he founded Irkutsk Oil Company, LLC jointly with a group of associates to operate oil and gas condensate fields located in Irkutsk region.

Ms. Sedykh graduated from Irkutsk State University in 1983 with a diploma in Law and began her career as a legal counsel in a state-owned enterprise in Primorskiy Kray. In 1985, she joined the Kuibyshev Irkutsk Heavy Machinery Plant as a senior legal adviser and then held the position of the Chief Legal Officer in "Vostsibneftegazgeologiya". Having extensive professional experience in the legal and industrial sector, Ms. Sedykh has been the head of Irkutsk Oil Company, LLC since its foundation in 2000.

Mr. Badilin graduated from the Irkutsk Institute of National Economy (now Baikal State University of Economics and Law) as an engineer and economist, and was a graduate student of the Leningrad Institute of Engineering and Economics named after P. Togliatti. He began his career in 1976 at the Kuibyshev Heavy Machinery Plant in Irkutsk as an engineer and advanced to the position of the Deputy Director of Economic Affairs. From 1994, Mr. Badilin worked in the banking industry and joined Irkutsk Oil Company, LLC in 2002 as the Deputy General Director for Economics. In January 2017 he became an Advisor to the General Director for Economic Affairs in Irkutsk Oil Company LLC.

In 1992, Mr. Donskoy graduated from the State Academy of Oil and Gas named after I. Gubkin with a degree in automation and telemechanics. From 2012 to 2018 he served as a Minister of Natural Resources and Environment of the Russian Federation. Previously, Mr. Donskoy held positions at JSC Lukoil, JSC Zarubezhneft, he also served as the Chairman of the Board of Directors of JSC Rosgeology.

Mr. Veremeev holds an MBA degree from Kellogg School of Management, a Master’s degree in economics from the Higher School of Economics and a Bachelor’s degree in maths from Moscow Institute of Electronics and Mathematics. He is a recognised independent director as certified by the Institute of Directors (U.K.). Mr. Veremeev has previously served as Managing Director in the investment banking department at UBS and similar roles at Bank of America Merrill Lynch and Morgan Stanley at their Moscow and London offices between 2001 and 2018. Mr. Veremeev is a Managing Partner of ResourceOne, an investment company focused on energy transition opportunities.


Marina Sedykh has been the CEO of JSC INK-Capital since March 2008.