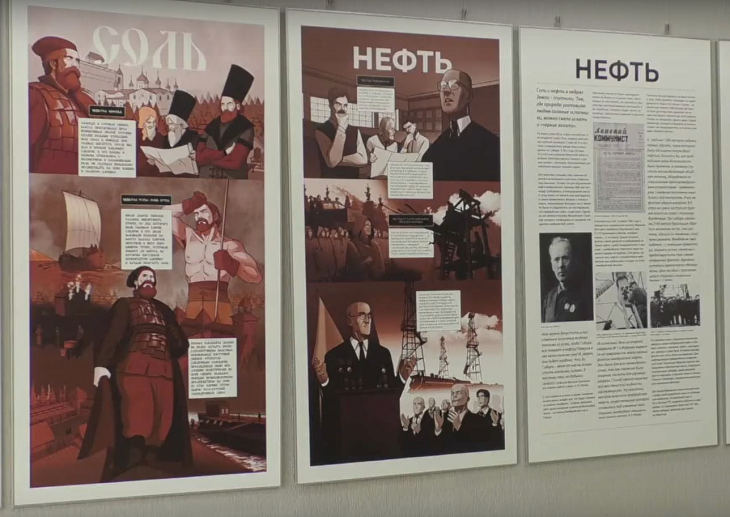 The exhibition is open until the end of 2022. Visiting is free of charge with a valid library card or by getting one issued.

The exhibits are the fruit of works undertaken within “The Industrial North” project – the winner in the grant competition called “The Energy of Native Land” organized by INK in 2021. Making this idea a reality was also driven by the anniversary of a significant industry milestone – 60 years since the first oil gusher in the Eastern Siberia, in the Markovsky field.

“We appreciate the library’s cooperation and sharing interesting materials. Irkutsk Oil Company was the pioneer in commercial oil production in the Eastern Siberia, and oil is intrinsically linked to salt. Producing oil means producing formation water at the same time that is rich in salts made up of useful components. This actually prompted a new line of the company’s business”, – said head of INK’s corporate museum Lyudmila Chernyavskaya at the exhibition opening.

As commented by the library press officers, the project was designed to present the history of discovering mineral deposits in the Eastern Siberia in the modern visual format: original comics, posters presenting documents and photographs created by artist Evgenia Demina. In addition, library historian Ivan Popov prepared an excursion, adventure game and quiz for a deeper involvement of visitors.

Irkutsk Oil Company (INK) is one of major private producers of raw hydrocarbons in Russia. The company incorporated in 2000 engages in geological study, exploration and development of 52 subsoil blocks in the Irkutsk Region, Krasnoyarsk Region and Republic of Sakha (Yakutia). INK’s largest investment project is the gas chemistry cluster developed in Ust-Kut town. It consists of gas production, treatment, transportation and processing facilities, two helium plants, and the Irkutsk Polymer Plant. In 2022, the Ministry of Industry and Trade, Gazprom, and INK signed a road-map document for lithium production in the Kovyktinsky field. The company now counts over 12 thousand employees.