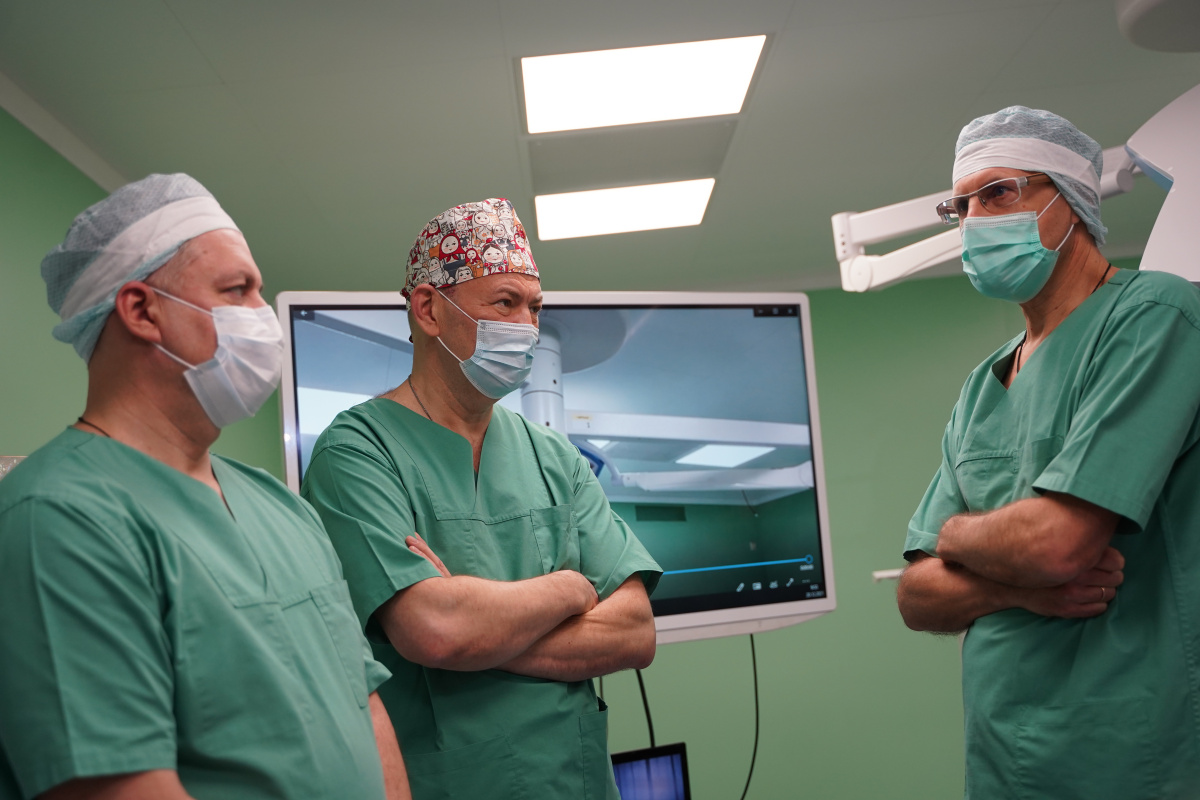 The new operating room was designed and built by a Swiss company with equipment supplied from Germany. The first surgery was successfully performed on December 20, 2021.

The new operating unit will increase the number of surgeries by 50%, an increase of 6,000 surgeries per year. The project was initiated by the hospital's chief physician and children’s surgeon, Yuri Kozlov. The creation of the operating unit was financed by Nikolay Buynov, the founder and chairman of the Board of Directors of Irkutsk Oil Company.

The 255-square-meter medical block was built in six months and includes two operating rooms — endosurgery and cardiothoracic surgery. In the first room, minimally invasive operations will be performed without the need for major incisions. This is less traumatic for young patients than a standard surgery. New, fully-equipped endosurgical and two LCD screens with 4K resolution were installed in the operating room as well.

The ultra-high-definition images will be broadcast by the cameras “from inside the patient.” The finest detail in the image of the operated area will allow surgeons to perform highly complex surgical operations. The digital capabilities of the operating room allow live broadcasts, where a direct feed of the screen is transmitted anywhere for remote consultations with the Russian doctors and doctors from other countries, as well as educational courses for surgeons and medical students.

The cardiothoracic surgery room will be used to perform surgeries on blood vessels, the brain and spinal cord. For vascular and neurosurgeons, modern surgical microscopes and an X-ray system have been installed there, which will allow operations to be performed with clear visual control.

To minimize infectious contacts, the principle of separation was organized: nursing staff and patients enter operating rooms through different entrances. The walls of the rooms are covered with special panels without joints, and anti-static linoleum is laid on the floor. Gas distribution pipes (oxygen, nitrogen, carbon dioxide), electrical and Internet cables are installed under the wall finish. Hoses and cables will no longer obstruct the working area for doctors during operations. Medical gas supply will be connected to the anaesthesia and respiratory devices directly to the console. Lighting in operating rooms is installed on ceiling fixtures.

“We have to create the most comfortable conditions for doctors to work in. The opening of such a modern operating room is a good example of the implementation of public-private partnerships. It has everything you need to provide quality medical care to young patients. A team of young professionals is being formed under the leadership of Yuri Kozlov. We don’t stop there. The next stage is important to us. We will continue to be involved in the reconstruction of the hospital complex. One of the tasks is to organize accommodations for families whose children are undergoing long-term medical treatment,” said Igor Kobzev, a Governor of Irkutsk region.

“Today is a great event — we are opening the best operating room east of the Urals, and I think we can claim to be the best pediatric operating room in Russia. The work was time-consuming, and its quality was achieved through the daily efforts of a large number of people. We have taken into account the most subtle requirements of modern technology in providing surgical rooms and operating theatres. Here is a true oasis of medical science and surgeon’s expertise, and most importantly, patient safety and treatment efficiency. This is the most important slogan today in surgery,” said Yuri Kozlov.

“It’s not the money that matters the most in this project. The most important things are happy parents’ eyes and healthy children. Our goal with Yuri Kozlov was to create a fulcrum that would help turn the hospital into a world-class, state-of-the-art paediatric medical centre in Siberia. We in Irkutsk are very lucky to have talented people — like Yuri Kozlov and his team, they are world-class surgeons. Today we are witnessing a world-class operation, patented in many countries. And the people who can perform these world-class procedures should be given the best equipment and conditions. And it must be a collective effort — with the support of society and the state,” said Nikolay Buynov.

Irkutsk Regional Children’s Clinical Hospital provides medical care to patients under the age of 18. The bed capacity is 375 beds for overnight stay, of which 45 are for a day stay. More than 10 thousand patients are treated in the hospital annually, and more than 42 thousand people visit the consultation and diagnostic centre. More than 75 % of patients are residents of remote areas of the Irkutsk region. About 600 people come for help from Russia and neighbouring countries. Some 750 consultations were provided to patients through remote monitoring.

The hospital has the only oncology department in the Irkutsk region, which provides care for children with malignant tumours and blood diseases, as well as a children’s dialysis unit.