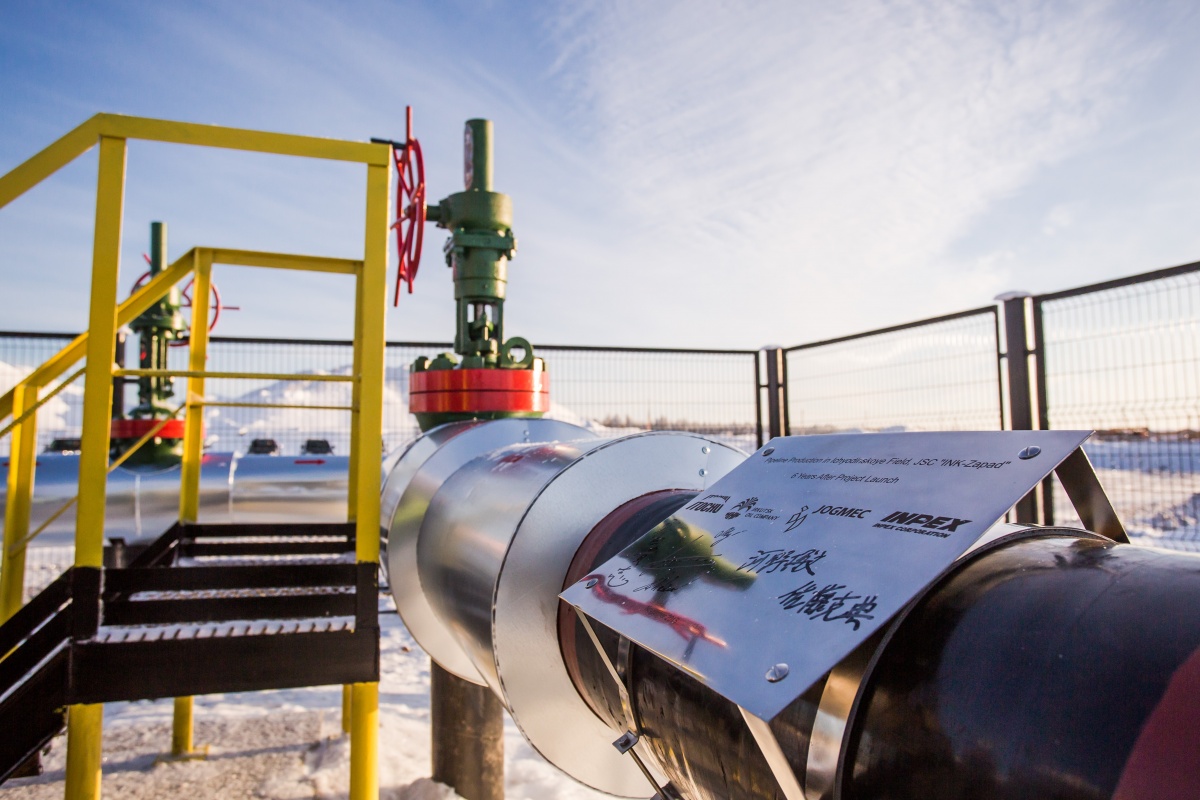 The first prospecting well was drilled for six months (the drilling operations completed in January 2012). In 2013 and 2014, before the pipeline construction, production was carried out during the period from November till March and the produced hydrocarbons were transported to INK’s Yaraktinskoye oil and gas condensate field by the winter road.

In the second half of 2015, the company completed the construction of 48.3 km oil pipeline running from Ichyodinskoye oil field to the boosting pump station of Yaraktinskoye oil and gas condensate field. In August, after testing operations were completed, the pipeline started operating in performance testing mode and after a while it was converted to the pilot production testing.

During the first 10 months of 2015, the field has produced 208 thousand tons of oil, which is 26% above the plan. With such performance, now Ichyodinskoye oil field is ranked number two in production rate, second only to Yaraktinskoye field, among the fields operated by INK. The maximum flow rate from one well reached 1,480 tons per day, which is the highest production rate among all wells in the fields and license blocks of INK.

The successful cooperation between Russian and Japanese companies was encouraged by the “Initiative for the Strengthening Japan-Russia cooperation in the Far East Russia and Eastern Siberia” introduced during the bilateral talks between the President of the Russian Federation Vladimir Putin and the Japanese Prime Minister Shinzo Abe in June 2007.

Following up the Initiative that was related to various areas of cooperation between both countries, INK and JOGMEC established the joint ventures of JSC “INK-Sever” (in 2007) and JSC “INK-Zapad” (in 2009), with participating interest of 51% INK and 49% JOGMEC.

Since then, for the past eight years, the shareholders of both JVs have carried out a large volume of prospecting and exploration works, including drilling of 27 wells, and discovered four oil and gas fields (B.Sinyavsky oil field, Ichyodinskoye and Bolshetirskoye oil fields, Tokminskoye oil and gas field). Today, the exploration works within license blocks are being carried on. After treatment the crude oil produced at these fields is pumped into the Eastern Siberia–Pacific Ocean pipeline system.

Background Information about the companies

Joint Stock Company “INK-Zapad” (JSC “INK-Zapad”) was incorporated by OOO “Irkutsk Oil Company” (51%) and Japan Oil, Gas and Metals National Corporation (JOGMEC) (49%) on May 7, 2009. In 2013, in line with the energy policy in Japan, JOGMEC transferred a part of its shareholding in the JV to ITOCHU Corporation and INPEX CORPORATION. JSC “INK-Zapad” holds the licenses for geological survey, exploration and production of hydrocarbons in Zapadno-Yaraktinsky and Bolshetirsky subsoil blocks located in Irkutsk region (the licenses expire on September 25, 2031). In 2012, JSC “INK-Zapad” discovered three fields within these blocks - Ichyodinskoye oil field, Bolshetirskoye oil field, and Tokminskoye oil and gas field. After six years since the establishment, JSC “INK-Zapad” commenced the year-round production of hydrocarbons.

OOO “Irkutsk Oil Company” (INK) was established on November 27, 2000. INK holds a group of companies conducting geological study, exploration and production of hydrocarbons in 22 license blocks in the Eastern Siberia. INK is a fast developing company that each year grows its oil production, implements advanced technologies, creates jobs, and pays more taxes to the consolidated budget of Irkutsk region by increasing its production capacities.  INK is on the list of top 20 largest Russian oil companies by reserves.

For the past seven years, INK Group has discovered seven new oil and gas fields in Irkutsk region.

In 2010, INK launched the plant for re-injection of gas into the formation at Yaraktinskoye oil and gas condensate field. This was the first commercial trial of cycling process in Russia. In 2013, INK commenced implementation of the project of gas reserves development in the northern areas of Irkutsk region.

INK and its subsidiaries are registered and pay taxes to the budget and non-budget funds of Irkutsk region. INK Group has about 4,500 employees. The amount of taxes paid by INK to the budgets of all levels (from the local budget to the federal one) during the period from 2007 to 2014, exceeds 100 billion rubles. INK’s successful activities contribute to development of the related industries, increase of the regional budget income, and solving of social problems in the northern areas.

Japan Oil, Gas and Metals National Corporation (JOGMEC) is a national organization which is in charge of securing a stable supply of oil, natural gas, nonferrous metals and other mineral resources to Japan. The corporation supports the activities of Japanese private companies in the projects related to exploration and development of oil, gas and solid mineral deposits around the world, as well as conducts various studies, including geological and geophysical surveys, using environment-friendly methods.