“Irkutsk region’s oil and gas condensate fields’ development must be multifaceted,” said Nikolay Buynov, Chairman of the Board, during the Irkutsk-based conference entitled “Development of Oil and Gas Resources of East Siberia and the Far East”. 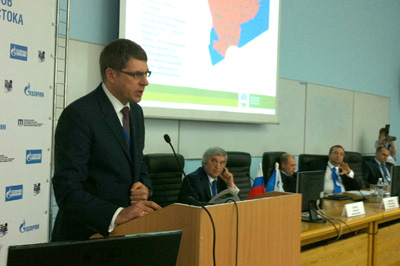 “Irkutsk region’s oil and gas condensate fields’ development must be multifaceted,” said Nikolay Buynov, Chairman of the Board, during the Irkutsk-based conference entitled “Development of Oil and Gas Resources of East Siberia and the Far East”.

Aiming to improve the technology behind hydrocarbon mining, Irkutsk Oil Company conducted extensive research in its various oil and gas fields. Three different methods of productions were tested at the time: 1) production from the field till depletion, 2) production using gas re-injection (gas cycling), and 3) production using gas cycling and additional injection of methane produced at other fields. Results show that the third method increases the condensate recovery factor, allowing for the production of additional hydrocarbons. Moreover, the full depletion method does not allow for the production of most of the condensate.

High content of ethane, propane, butane, and condensate in natural and associated petroleum gas in the fields of the northern Irkutsk region enables large-scale gas processing and gas chemical complex with a potential production of up to 2 million tons of polyolefin (polyethylene, polypropylene) per year. Management of the Irkutsk Oil Company is positive that gas production and processing is commercially viable in the Irkutsk region, and has already begun to realize some of these projects. INK plans to produce up to 500 thousand tons of high and low-density polyethylene per year.

Building the chemical complex will enable the production of goods for both household and industrial use. Additionally, realization of the project will boost development of the infrastructure of the northern Irkutsk region (specifically the gas transmission infrastructure, the construction of power generation capacity). Furthermore, it will definitely improve the regional labor market, the living standards of the people in the northern areas of the Irkutsk region, and funding of the local budgets.

Processing gas would allow for separation of methane, which could be a foundation for gasification of the city of Ust’-Kut. This project is to be realized in coordination with the local authorities of the Government of the Irkutsk region. If the municipality will ensure gas consumption, INK is ready to build a pipeline to Ust’-Kut with a length of 93 kilometers.

Realization of the investment projects is supported by the government of the Irkutsk region, as well as by the Governor. Mr. Buynov affirmed that a particular goal of the the regional law of the reduced profit tax rate is to stimulate investment processes. Mr. Sergey Eroschenko, governor of the Irkutsk region, said during the conference that the further development of the gas chemistry and gas processing plants in the Irkutsk region is associated with the modernization of existing production plants as well as the creation of several new ones in the cities of Angarsk, Sayansk, Usolye-Siberirskoe and Ust’-Kut. The Governor noted the work of INK as a positive example of the development of oil and gas facility.

“Irkutsk Oil Company, in cooperation with the regional government, demonstrates the amazing dynamics of investments and production. Currently, the new gas-powered electric station and chemical complex in Ust’-Kut is under consideration,” Mr. Eroschenko declared.