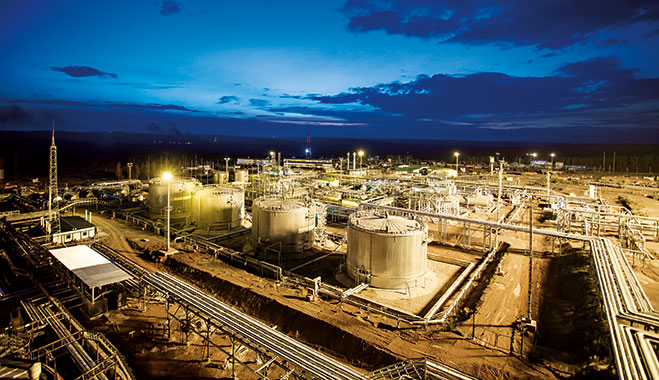 Irrespective of the challenges facing fossil fuels in Russia today, Irkutsk Oil has strengthened its position as one of the leading independent upstream producers, not just in East Siberia but also in the whole of Irkutsk region. Within the last four years, it has boosted per day production by 630 percent, and last year produced 4.1 million tons of oil and condensate.

According to an industry expert, Irkutsk Oil has become “the largest company among the small players” and led the charge to boost output in East Siberia. “I want to put East Siberia on the map as an oil producing region”, said Nikolay Buynov, Chairman of the Board of Directors. “We are confident that our joint efforts will not only contribute to the growth of our business, but also to the socio-economic development of the areas where the company operates.”

On June 5 2015 Irkutsk Oil produced its 15-millionth ton of hydrocarbons since it began operations in November 2000 – achieved propitiously in the lead-up to the company’s 15th year in business – demonstrating the solid growth that Irkutsk enjoys to this day.

In 2015, it plans to produce up to six million tons of crude oil, increasing production by about 50 percent. In order to meet production growth, the company has launched plans to increase the capacity of the Markovsky uploading facility from 3.4 million to seven million tons. The expanded and modernised facility will feature three storages, measuring 20,000 cubic meters each, along with sieves, pumps, a power supply system, and other facilities.

Even in a challenging climate, the company continues to expand its resource base. In 2014, licenses for the geological study, exploration, and production of hydrocarbons at the Verkhnetirsky and the Verkhnenepsky blocks were bought at the state-run auctions. Both of the new licence blocks are located in the Irkutsk region and border licenced blocks already owned by the company, bringing the total number of licence blocks and fields in Irkutsk Oil’s portfolio to 22.

The company’s impressive development has not gone without recognition, and the company was included in the list of Russia’s top-30 fastest-growing companies, receiving the honorary second place. Organised by the most prominent Russian business news agency RosBusinessConsulting (RBC), the journalists who conducted this research added that it was very positive young fast-growing companies such as Irkutsk Oil that are capable of influencing industries and sectors, as well as creating new markets in the current economic environment.


The good news comes as a result of the company’s growing number of producing wells, with exploration and production drilling spanning nine fields and licence blocks in the Irkutsk region and the Republic of Sakha (Yakutia), about 70 percent of which is located at the Yaraktinsky field. The amount of drilling has increased in comparison with 2013, up from 177,000 to 300,000 in metres. Moreover, the company applies modern stimulation techniques and enhanced oil recovery methods in problematic wells.

In 2014, Irkutsk Oil began to carry out pilot testing of a new sulphur removal unit at the Yaraktinsky field. The new facility enables the company to remove some sulphur impurities contained in crude oil of certain wells at this location. The first stage aims to reach the apex of the total processing capacity of sour oil, achieving up to 600,000 tons per year. In the second stage of production in 2016 Irkutsk Oil plans to extend its capacity up to 1.3 million tons per year. The company is also considering an extension of neighbouring facilities, assuming further production will increase. The new facilities will enable the building of additional wells that were previously unattainable, due to abnormal sulphur content in the collective operation.

Last year was not only a year of record highs, but it also proved to be one filled with challenges. In the first half of 2014, crude oil prices were over $100 per barrel, only to later lose more than half of that value throughout the second half of the year. The company had to quickly adjust and react to the sharp decline in oil prices and the volatility associated with the roller-coaster ride of exchange rates, coupled with the deteriorating lending capacity of financial institutions constrained by sanctions. The group’s low financial leverage, growing production, and smart allocation of resources helped it to navigate in the stormy waters of the economic turbulence in Russia.

“We step in the difficult way, and that is not only because of the oil crash”, said Buynov. “In 2017, the production at the Yaraktinsky field may reach the maximum level and then it could start to steadily decrease. To lift output we plan to apply the advanced technologies, enhancing oil recovery such as water-alternating-gas injection.” Moreover, Irkutsk Oil is getting ready to pay more taxes for mineral extraction – the tax incentives for Yaraktinsky field expire at the end of 2017. “But there’s no time to stop. We just have to get on with our work. We become stronger, sturdier and more independent with each coming year”, said Buynov.

The company is facing many challenges, mostly in connection with production growth, that require it to quickly adopt to new and advanced technologies. Motivated professionals are indispensable in facing and overcoming these challenges. In a bid to improve HR management quality, Irkutsk Oil began to strengthen its management team and employ highly skilled specialists. “This improvement claims attention because new employees should be involved in business processes as quickly as possible”, noted Tatyana Lukachich, the Deputy Director General for HR.

She added that Irkutsk Oil implements measures directed at the improvement of the HR management quality, the creation of a transparent staff recruitment process, the efficient evaluation of the capabilities and performance of the company’s personnel, as well as the implementation of health and social safety programmes. The company’s HR policies create a favourable environment for employees’ self-improvement, new skill development, and career advancement. 
The company is also focused on advancing staff training. In 2014, a corporate training centre was created to provide educational classes, as well as occupational and fire safety training. It also cooperates with many higher educational institutions and organisations in Irkutsk, Moscow, and other cities that provide training, re-training and qualification development to personnel. Professional training courses are screened and selected to maximise their effectiveness and to provide employees with the required knowledge and expertise.

Therefore, by the end of the 2015, the company plans to create a list of appropriate training courses for every employee. “We are going to improve the system of staff training and development, making it transparent and constant”, said Lukachich. “It allows us to attract and retain motivated, skilled personnel”. The company is well known as a desirable employer: in 2014, Europe’s leading staffing agency SuperJob placed the company repeatedly among the top in a list of more than 850,000 top employers.

Despite a great and growing number of socio-economic challenges, Irkutsk Oil continues to implement large-scale environmental projects in areas where the company operates. It uses its best efforts to preserve favourable conditions for the environment and promote the rational use of natural resources at all of its fields and licence blocks.

In particular, the company applies maximum effort to industrial and household waste effective management. It has installed systems for the thermal destruction of oil sludge and household waste. Furthermore, Irkutsk Oil has built and operates a solid waste landfill, which is used free of charge by the local village Verkhnemarkovo. In 2015, it began preparations for building a solid waste landfill at the Yaraktinsky field. Moreover, the landfill will receive drill cuttings, and Irkutsk Oil plans to construct a wastewater treatment facility at this same location. The company strives to protect both surface and subsurface water resources and minimise its impact on water resources at all stages of exploration and production.

Both the World Wildlife Fund and Creon Group recognised Irkutsk as the third best company for environmental impact. According to the organisers of the project, the purpose of this rating is to promote effective use of hydrocarbon resources, environmental protection, and the socially responsible management of business in Russia, all of which Irkutsk Oil does to great effect.