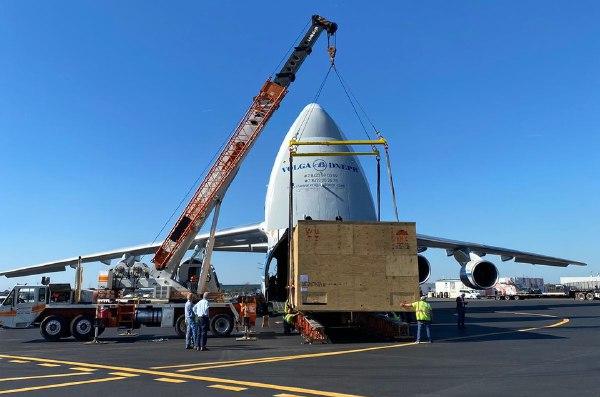 The process of loading equipment onto the plane took almost a whole day. On the runway, a compressor was loaded with a special crane through the tail section, and the PSA unit was loaded through the "nose" of the aircraft. The total weight of the cargo was about 60 tons.

The cargo plane left Philadelphia airport on October 21, and safely landed at the Bratsk airport in Irkutsk region, Russia sixteen hours later. During the flight to Bratsk, the plane had to make a refueling stop in Reykjavik, Iceland.

After landing in Irkutsk, the equipment was transported by road to Ust-Kut, and then to the Yaraktinsky field of the Irkutsk Oil Company.

The logistics of the operation were achieved in accordance with the timing and schedule that was originally planned.

“A titanic job has been accomplished - a Russian plane, the largest cargo plane on the planet, flew to America for a cargo that will be delivered to the field of the company. All logistics - route planning, equipment loading, take-off - everything was planned by the hour. In the difficult conditions of a pandemic, organizing such a delivery is a really heroic deed”, said Yuriy Rubin, Deputy General Director of the Irkutsk Oil Company.

Transportation by aircraft was chosen for two reasons: firstly, due to the fact that the equipment should not be exposed to low temperatures, and, secondly, because of the efficiency of delivery by plane.

An-124 "Ruslan" is the largest serial cargo aircraft in the world, developed by the Ukrainian Design Bureau. The aircraft is capable of lifting more than 120 tons of cargo into the air and flying over a distance of more than seven thousand km without refueling. The length of the plane is 69 m, the height is 21 m, the wingspan is 73.3 m, and the wing area is 628 sq. m. The AN-124 chassis consists of 24 wheels.